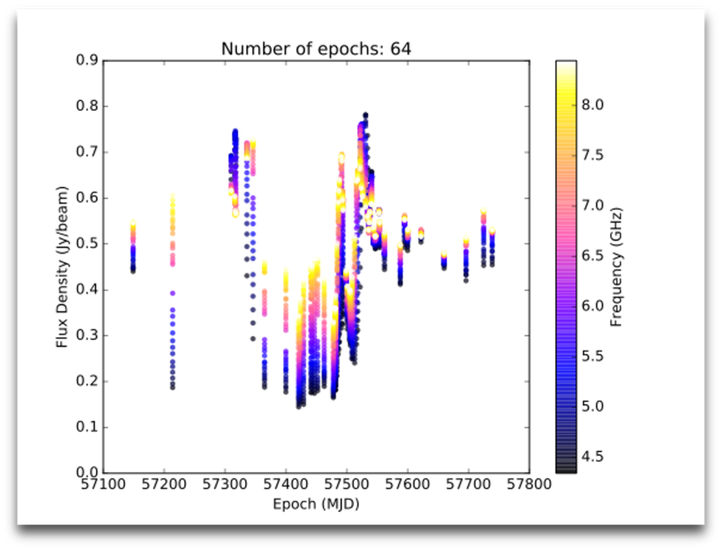 An extreme scattering event caught in real time. Image Credit: Keith Bannister (CASS). From ATNF Daily Astronomy Picture
This project was a subcomponent of my larger project with the CSIRO, which you can read about here: The spectral signature of interstellar scintillation

Most cases of interstellar scintillation are quite weak, however some events are much more extreme and involve strong lensing of the radio signal by a highly localised, highly dense cloud of ionised material. These are known as Extreme Scattering Events, or ESEs. They are historically discovered by post-production analysis of lightcurves, however, the ATESE group has now pioneered a new method of real-time spectral analysis.

ESEs are extreme but relatively brief compared to how often most radio sources are observed. As a result, by the time an ESE is identified in post-processing, the event may be over halfway done and there will be a dearth of information for the initial ESE phase. A real-time analysis method means ESEs can be identified as they begin and observations of the source can be undertaken more frequently.

In this brief sub-project, I tested the completeness of the new method by comparing its results to the old, tried-and-true method of post-production analysis. I confirmed that all previously-known ESEs were recovered by the ATESE method but also identified up to 3 new (possible) ESEs.